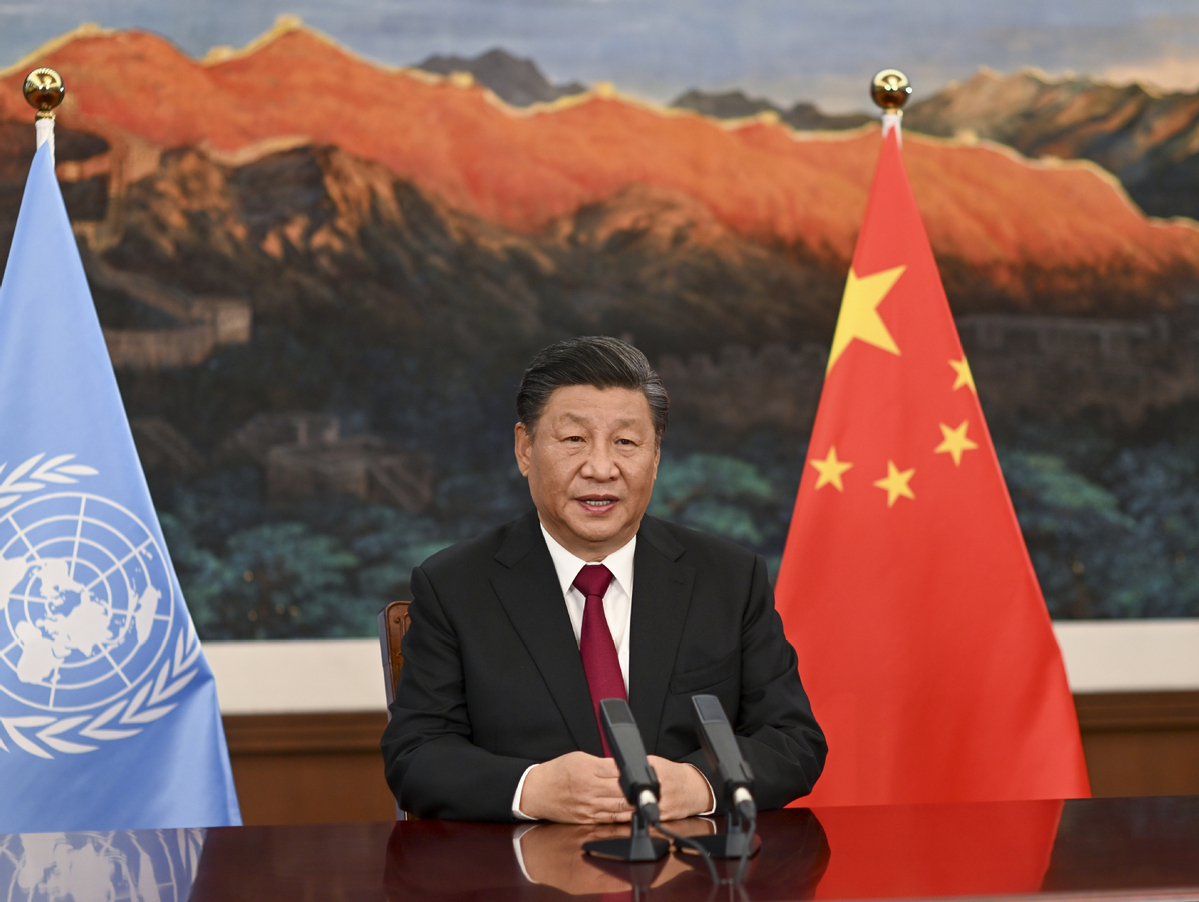 President Xi Jinping addresses the leaders' summit of the 15th meeting of the Conference of the Parties to the Convention on Biological Diversity, which was held in Kunming, Yunnan province, via video link from Beijing on Tuesday. LI XUEREN/XINHUA

They made the remarks following Xi's keynote speech at the summit during the 15th meeting of the Conference of the Parties to the Convention on Biological Diversity, or COP 15.

"As a Chinese saying goes, 'All beings flourish when they live in harmony and receive nourishment from nature'," Xi said.

"Biodiversity makes Earth full of vigor and vitality, and lays the foundation for human survival and development."

The president stressed that man and nature need to coexist in harmony, saying, "We need to have deep reverence for nature, respect nature, follow nature's laws and protect nature."

With the theme "Ecological Civilization: Building a Shared Future for All Life on Earth", the summit in Kunming runs until Friday and will resume in the first half of next year.

Ecological civilization is a concept Xi promotes for balanced and sustainable development that features the harmonious coexistence of man and nature.

He said what impressed him most is that Xi put forward the visions to build a homeland of harmonious coexistence between man and nature, coordinated advancement of the economy and the environment and the common development of all countries.

Huang said the president also set out a blueprint and road map for the world's high-quality development with four proposals. In addition to featuring harmonious coexistence between man and nature, this development should see people's well-being, social equity and justice increasingly strengthened and the international governance system becoming more fair and equitable.

"The four proposals have further deepened and developed the concept of sustainable development," Huang said.

Zhang Yongsheng, director of the Research Institute for Eco-civilization at the Chinese Academy of Social Sciences, said the four-point proposal is "a crystallization of China's wisdom in exploring a sustainable development path" as well as a major change in its development concepts and models.

"In particular, when Xi proposed to 'start a new journey of high-quality development for humanity', he was actually sharing China's wisdom with the world," Zhang said.

"I believe this will greatly boost global confidence in dealing with biodiversity and environmental issues, and promote the progress of global biodiversity conservation and sustainable development," he added.

He said much remains to be done to achieve the objective of the Convention on Biological Diversity for humans to live in harmony with nature by 2050.

"President Xi's new commitments today are significant, and will hopefully inspire further political momentum within China and internationally," he said.

"With its financial commitment, China joins a number of countries and private actors in providing large amounts of financial resources, which will hopefully further spur other countries to step up their level of resource mobilization, especially the rich, developed nations," he said.

Gao Jixi, director of the Ministry of Ecology and Environment's Satellite Application Center, said Xi's remarks sent out "the strongest voice of biodiversity protection to the world".

President Xi announced to the world China's important responses on biodiversity conservation and climate change, showing the country's determination and confidence in such fields and its responsibility and leadership as a major country, Gao said.