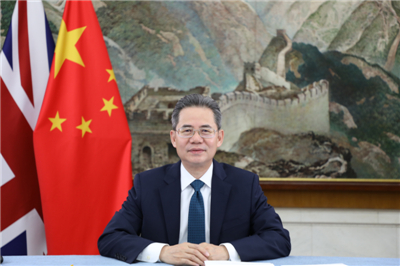 "At the Leaders Summit of the CBD COP15 in Kunming, President Xi Jinping delivered an important speech in which he expounded in a comprehensive way China's policies and measures on biological preservation and charted the course for the success of the conference," Zheng said at a high-level dialogue between HRH The Prince of Wales and Chinese business leaders.

"Under the guidance of Xi Jinping thought on ecological civilisation, the idea of 'lucid waters and lush mountains are mountains of gold and silver' has become the national consensus, and ecological conservation has been incorporated into the overall planning for China's economic and social development," he said.

"China is taking concrete and vigorous steps to develop green, low-carbon and circular economy, preserve biological diversity and respond to climate change. It has taken the initiative to establish the Belt and Road Initiative International Green Development Coalition, proposed to peak carbon emissions before 2030 and realise carbon neutrality before 2060, and pledged to stop building new coal-fired power plants overseas," he added.

Zheng emphasized that the significant measures that China takes not only meet the needs to achieve sustainable development at home and better life for over 1.4 billion Chinese people. They are also a powerful push for climate response and ecological conservation around the world and a display of China's commitment as a responsible country.

He also said China and the UK enjoy enormous potential for cooperation on green and low-carbon development, ecological conservation and climate response.

He said he hopes that the business communities of China and the UK will leverage their respective strengths, actively expand practical cooperation both at the bilateral level and in third markets along the Belt and Road Initiative, and realize green and low-carbon development for China, the UK, and the relevant third party.

"I look forward to new contribution emanating from such cooperation to ecological conservation around the world", the ambassador said.