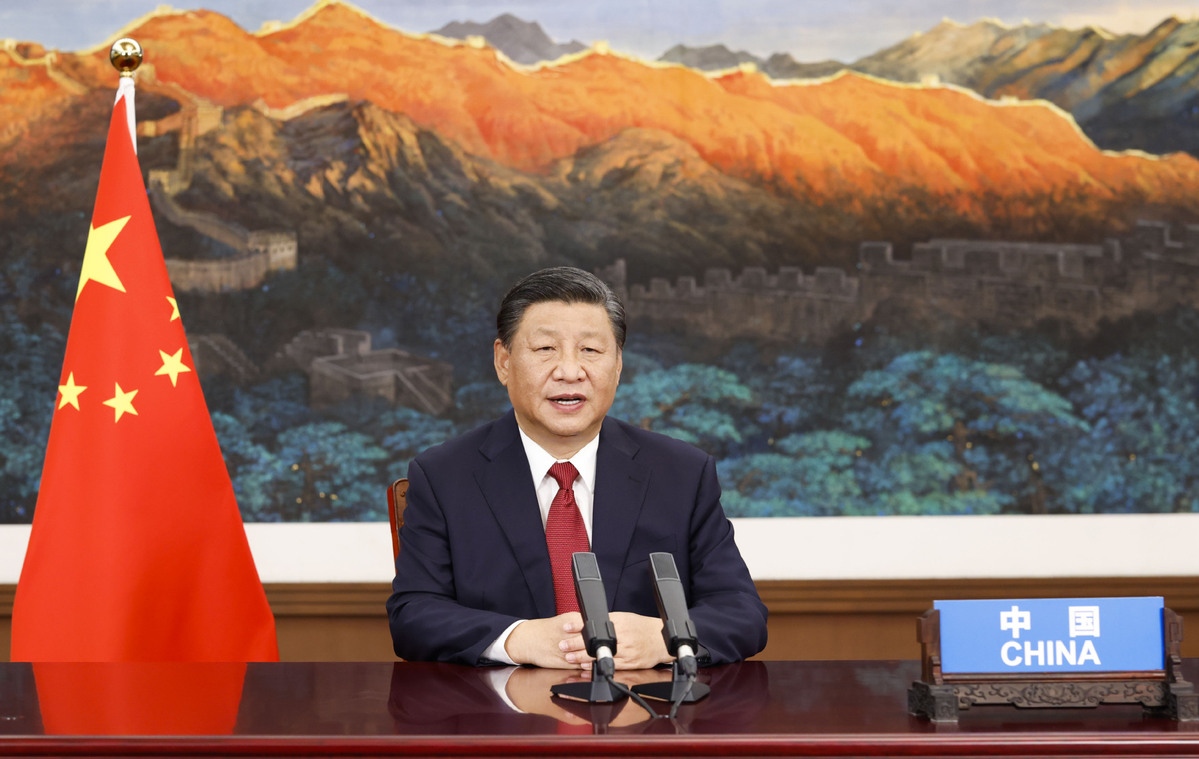 President Xi Jinping addresses the general debate of the 76th session of the United Nations General Assembly via video on Sept 21, 2021. [Photo/Xinhua]

Xi proposed the initiative while addressing the general debate of the 76th Session of the United Nations General Assembly on Tuesday via video link.

He called on the international community to accelerate implementation of the UN's 2030 Sustainable Development Goals for more robust, greener and balanced global development, and fostering a global community of development with a shared future.

Wang announced at the forum that China has provided more than 1.25 billion doses of COVID-19 vaccines for the world in honoring its solemn pledge to make Chinese vaccines a global public good.

To advance international development, Wang called on countries to deepen cooperation in fighting COVID-19 to jointly prevail over the challenge, strengthen macro-policy coordination to promote economic recovery and pursue green and low-carbon development.

He also stressed the need to uphold fairness and justice, create an enabling environment for development, safeguard true multilateralism and deepen the global development partnership.

Armida Salsiah Alisjahbana, executive secretary of the UN Economic and Social Commission for Asia and the Pacific, expressed her "appreciation" for Xi's statement at the UN General Assembly general debate on Tuesday.

Via video link on Sunday, she quoted Xi's remark that countries must "work together to steer global development toward a new stage of balanced, coordinated and inclusive growth".

Hailing China's commitment to implementing the United Nation's 2030 Agenda for Sustainable Development, she said the "best practices of China on SDG implementation will be very valuable to be shared with other countries as well".

"And what we learn from the endless efforts of China is that a key enabling factor is cooperation and partnership among countries," she added.

She said in a video address that while some countries have vaccinated their populations and are on the path to recovery, others lack vaccines and have weak health systems, which pose serious problems. "We need to ensure vaccines for all, because no one is safe until everyone is safe," she said.

"It is crucial that China reaches its goal of carbon neutrality by 2060. It's important for China and for the world as a whole," Solberg said.

At the forum, UN Under-Secretary-General for Economic and Social Affairs Liu Zhenmin also commended China for its strong commitment to the 2030 Agenda for Sustainable Development.

Technology is transforming the world, he said, but over 4 billion people are disconnected from the digital world. He added the world is faced with "a triple planetary emergency: a climate crisis, a nature crisis and a pollution crisis".

"These crises can only be overcome through solidarity, innovation and transformative change," he said, noting that countries "must deliver a greener and a more inclusive people-centered future".