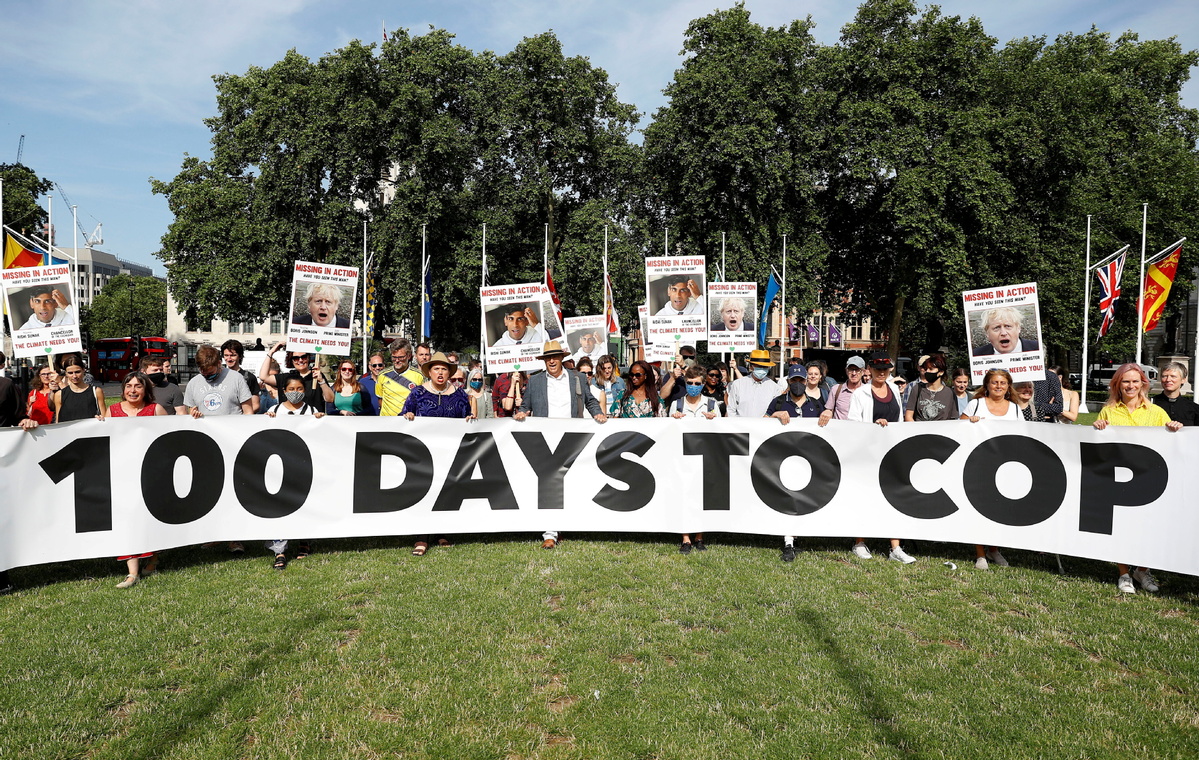 Protesters from the Climate Coalition demonstrate, with 100 hundred days to go before the start of the COP26 climate summit, in Parliament Square, London, Britain, July 23, 2021. [Photo/Agencies]

A coalition of more than 1,500 environmental groups has called for the postponement of the COP26 climate change conference in Glasgow at the end of October, claiming that lopsided global COVID-19 vaccine distribution makes attendance unequal.

The talks, delayed by a year because of the pandemic, will run from Oct 31 to Nov 12, and aim to help countries progress toward the goal of net zero carbon emissions by 2050 in a bid to limit the impact of climate change.

Usually, such a gathering would attract delegates from nearly 200 countries. But with so many places still facing COVID-19 crises, or having limited vaccine programs, protesters calling themselves the Climate Action Network said it is wrong for the summit to go ahead.

"Our concern is that those countries most deeply affected by the climate crisis and those countries suffering from the lack of support by rich nations in providing vaccines will be left out of the talks," Tasneem Essop, the group's executive director, told Reuters.

With the issue of climate change having been so visibly demonstrated by extreme weather conditions all over the world this year, the issue's already high stakes were raised further this summer by a report from the United Nations-backed Intergovernmental Panel on Climate Change, compiled in conjunction with 234 authors and 195 governments.

The report said it was now a "statement of fact" that humanity is damaging the climate, and it is "unequivocal that human influence has warmed the atmosphere, oceans and land".

UN Secretary-General Antonio Guterres called the findings a "code red" warning for humanity and said it increased the burden of responsibility on those taking part in the Glasgow summit. "There is no time for delay and no room for excuses. I count on government leaders and all stakeholders to ensure COP26 is a success," he added.

In response to the vaccine protest, a spokesperson for Guterres said the proven urgent nature of the COP26 agenda meant that there was no way it could be delayed any further.

The UK government has begun delivering vaccines to conference delegates for the event to take place in time, but the activist coalition said it has not acted fast enough.