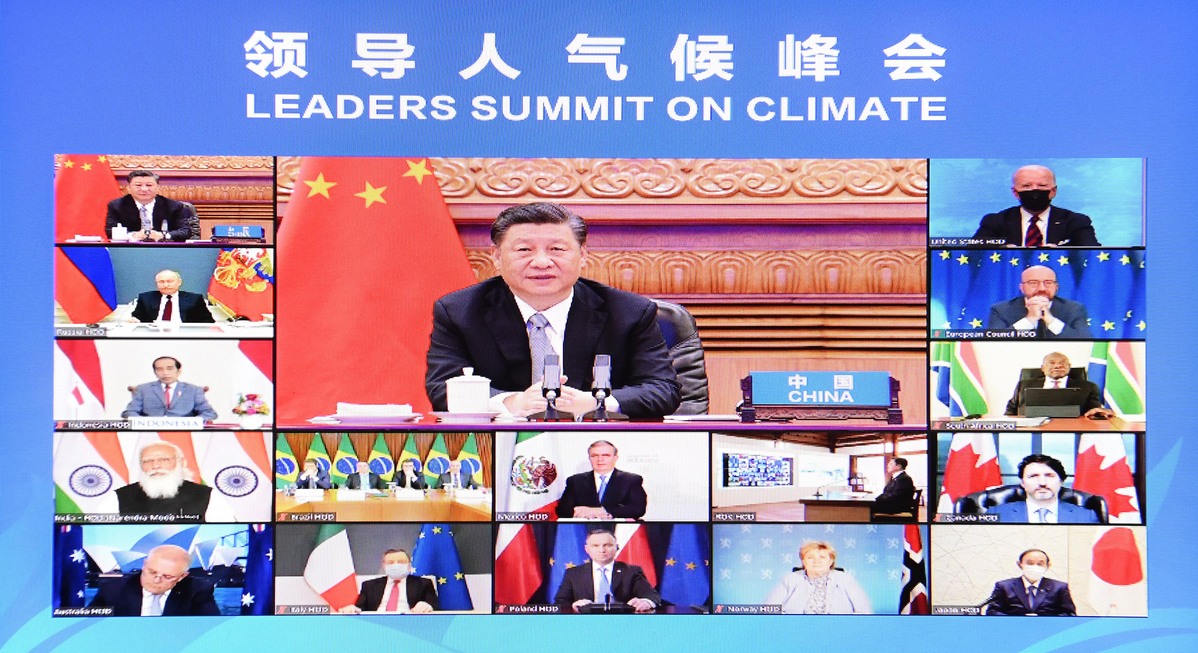 President Xi Jinping addresses the Leaders Summit on Climate via video link from Beijing on Thursday. Xi delivered an important speech titled "For Man and Nature: Building a Community of Life Together" at the two-day event hosted by the United States. [Photo/Xinhua]

Xi: Intl community needs to build a community of life for man and nature

President Xi Jinping called on Thursday for "unprecedented ambition and action" from the international community to build a community of life for mankind and nature in order to jointly cope with the challenges from climate change.

Xi made the remark while delivering a speech via video link in Beijing during the virtual Leaders Summit on Climate hosted by the United States.

During the speech, he welcomed the return of the US to the multilateral climate governance process and reiterated China's firm commitment to upholding multilateralism, as well as its effort to advance the building of a fair and equitable global environmental governance system for win-win cooperation.

"Faced with unprecedented challenges in global environmental governance, the international community needs to come up with unprecedented ambition and action. We need to act with a sense of responsibility and unity, and work together to foster a community of life for man and nature," Xi said.

He underlined the importance of upholding multilateralism in climate governance, saying countries should adhere to international law, promote fairness and justice, take effective actions and safeguard the international system with the United Nations at the core.

Countries should follow the objectives and principles laid out in the UN Framework Convention on Climate Change and the Paris Treaty, and work to deliver the UN's 2030 Agenda for Sustainable Development, Xi said.

While calling for strengthening partnerships, Xi said countries should take consistent actions, honor their commitments and avoid pointing fingers at each other.

He reiterated the need to be committed to the principle of common but differentiated responsibilities, which he called "the cornerstone for global climate governance".

Developing countries face various challenges, such as fighting COVID-19, developing their economies and addressing climate change, and their particular difficulties and concerns should be taken into consideration, Xi said.

"Developed countries need to increase climate ambition and action. At the same time, they need to make concrete efforts to help developing countries strengthen the capacity and resilience against climate change, support them in financing, technology, and capacity building, and refrain from creating green trade barriers," he added.

Xi said China has done its best to help developing countries build capacity against climate change through various forms of results-oriented South-South cooperation. "From remote sensing satellites for climate monitoring in Africa to low-carbon demonstration zones in Southeast Asia and to energy-efficient lights in small island countries, such cooperation has yielded real, tangible and solid results." 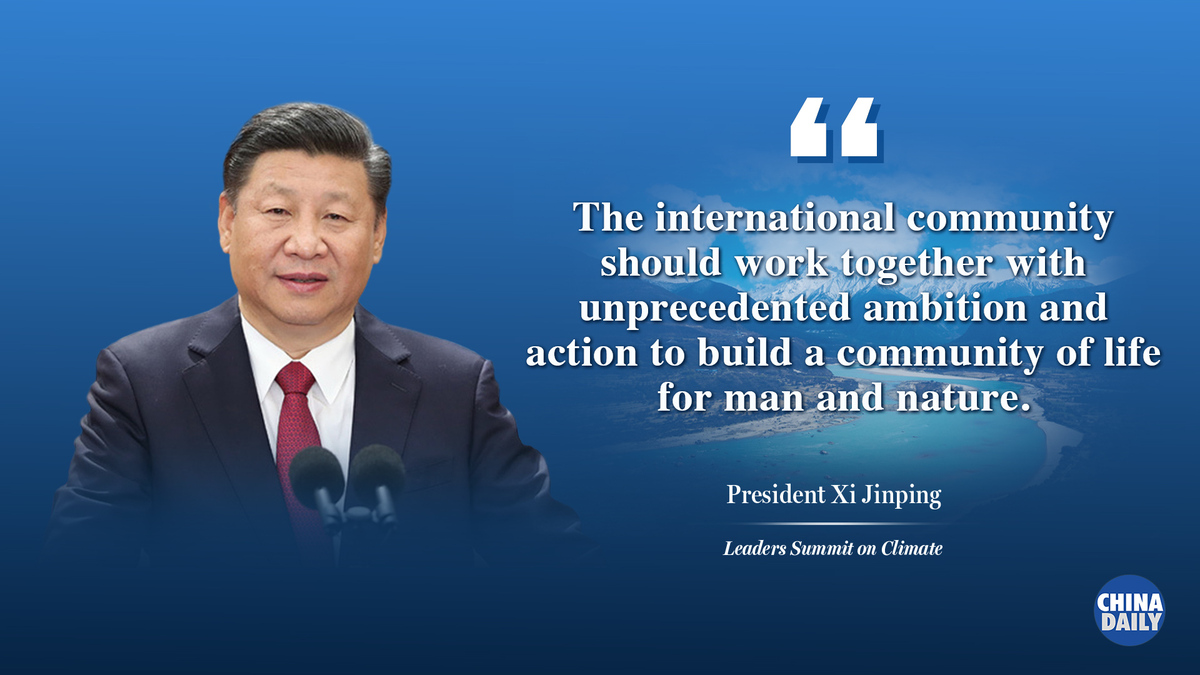 China has also made ecological cooperation a key part of Belt and Road cooperation, he said. "A number of green action initiatives have been launched, covering wide-ranging efforts in green infrastructure, green energy, green transport and green finance, to bring enduring benefits to the people of all Belt and Road partner countries."

Speaking of China's actions to deal with the climate crisis, Xi said the country adheres to a path that puts ecological conservation first while pursuing green and low-carbon growth.

Xi announced last year that China will peak its carbon dioxide emissions before 2030 and will achieve carbon neutrality before 2060.

"This major strategic decision is made based on our sense of responsibility to build a community with a shared future for mankind and our own need to secure sustainable development," Xi said at the summit.

He added that China has committed to move from carbon peak to carbon neutrality in a much shorter time span than what it might take many developed countries, and "that requires extraordinarily hard efforts from China".

The targets of carbon peak and carbon neutrality have been added to China's overall plan for ecological conservation, Xi said, adding that China will strictly control coal-fired power generation projects, and strictly limit the increase in coal consumption over the 14th Five-Year Plan (2021-25) period and phase it down in the 15th Five-Year Plan (2026-30) period.

"Moreover, China has decided to accept the Kigali Amendment to the Montreal Protocol and tighten regulations over non-carbon dioxide emissions," he said. "China's national carbon market will also start trading." 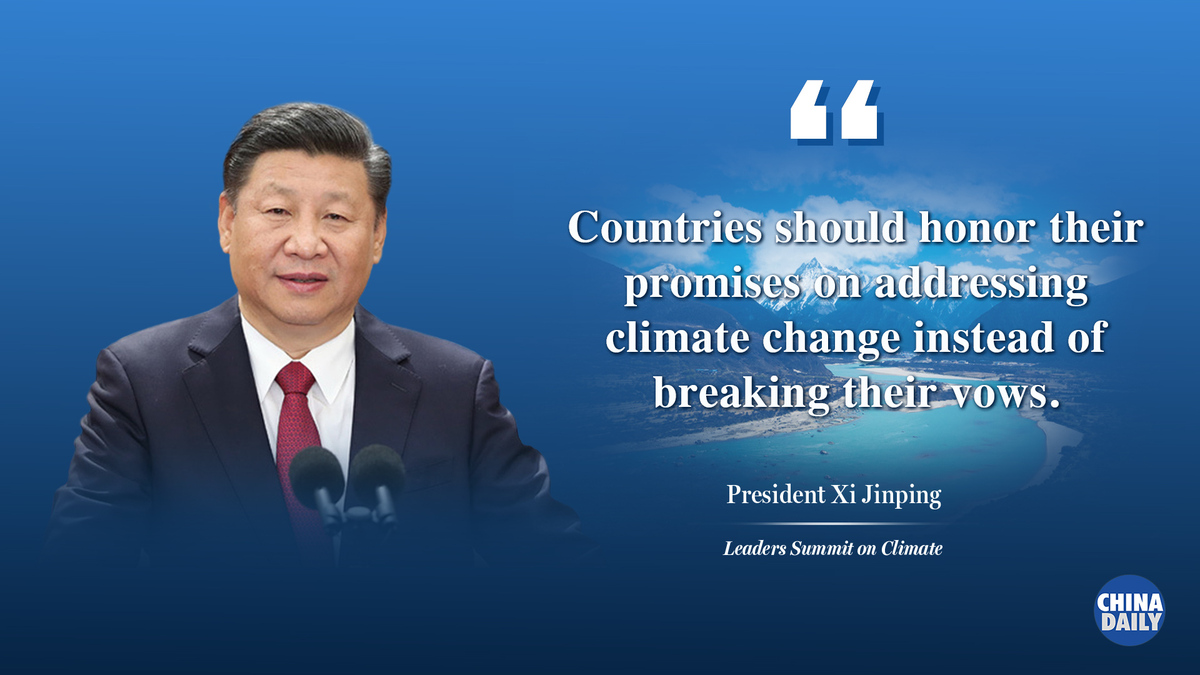