Dr. Pandian also expressed heartfelt thanks to the parties for their work. He said that the tripartite cooperation among the government, the enterprises and the development bank set a good example for infrastructure development to be conducted in “Belt and Road” countries.

Director General Jiao Xiaoping pointed out that AIIB was becoming more and more influential as a multilateral financial institution dedicated to green low-carbon sustainable development goals. As an innovative financial mechanism from the national budget to address climate change, CDM Fund played an active role in linking the government and the market, the budget and the financing, and the domestic players and the global players, and it was actively promoting a market-oriented, international low-carbon industry with the participation of private sectors. Beijing Gas Group was the biggest urban gas supplier in China and undertook the responsibilities of gas infrastructure construction, management and development in the capital, Beijing. This cooperation was a good example of the innovative business cooperation model and would contribute to air pollution treatment and improvement of quality of life in Beijing.

General Manager Hou Zibo said that AIIB and the CDM Fund, both financial institutions that aimed to improve environmental governance at international level, had made noticeable achievements in promoting environmental protection. Beijing Enterprises Holdings Group focused on the investment and operations of major urban infrastructure and city operation services, which fit well with the purposes of AIIB and the CDM Fund. He hoped that the parties could give full play to their own advantages and communicate and cooperate in more fields.

President Li Yalan of Beijing Gas Group expressed sincere thanks for the support given by AIIB and the CDM Fund. She guaranteed that Beijing Gas Group would make full use of the special purpose fund to finance the rural coal-to-gas project. The coal-to-gas switch in rural areas in Beijing was conducted in response to the call of the central government, “Implement the rural vitalization strategy and promote the construction of beautiful village”, and it was an important measure to “make our sky blue again”. This project was the fruit of the close cooperation of the three parties and it was also a new starting point for future achievements. Beijing Gas Group was willing to cooperate with AIIB and the CDM Fund on domestic and overseas environmental protection projects and make greater contribution to the implementation of the national energy security strategy and the economic and social development of the capital city.

The rural coal-to-gas project extensively collects funds from international multilateral financial organizations and the public and private sectors. With the objective of promoting the transformation to green economy and improving people’s livelihood, it is of great significance to environmental protection and economic development of Beijing and China at large. 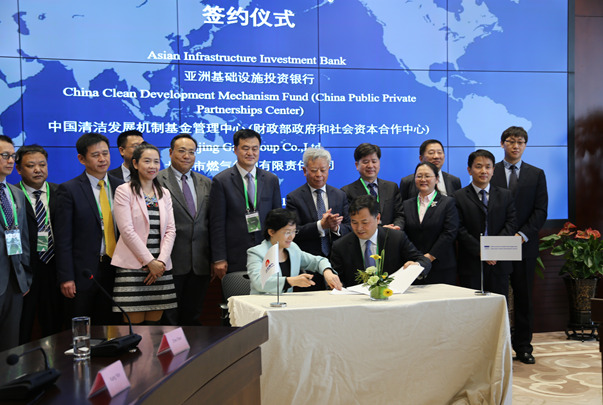